This post is part of the Bette Davis Blogathon which runs April 3-5 hosted by Crystal from In the Good Old Days of Classic Hollywood!

I love classic film characters, the people were glamorous and with razor-sharp wit and  no film captures old Hollywood’s witty snark more than the 1942 film, The Man Who Came to Dinner which stars the one and only Miss Bette Davis.

Already a smash Broadway hit by Kaufman and Hart, The Man Who Came to Dinner was a sure-fire comic hit for Warner Brothers.

A Far From Humble Beginning

George S. Kaufman & Moss Hart or “The Gilbert & Sullivan of the 1930s”, produced scripts from 1930-1940 before separating to produce individual projects but the two remained the best of friends. As a duo, their plays include:

Theater Critic for the New York Times and the host of the Radio Show The Town Crier, and member of the Algonquin Round Table, Alexander Woollcott was the inspiration for the character “Sheridan Whiteside.”

One day, Alexander Woollcott showed up unannounced at Hart’s estate, and proceeded to take over the house. Woollcott insisted on sleeping in the master bedroom, terrorized Hart’s staff, demanded chocolate milkshakes and chocolate cake, upon departure Woollcott wrote in Hart’s guest book, “This is to certify that I had one of the most unpleasant times I ever spent.” Hart related the story to Kaufman and remarked that he was lucky that Woollcott hadn’t broken his leg and become stuck there. Kaufman looked at Hart, and the idea was born.

Take a Seat at the Algonquin Round Table

The Man Who Came to Dinner‘s larger than life characters are based on the writers and theater elite who met regularly at the Algonquin Hotel during the 1920s. This amazingly creative and silver-tongued group were the subject of the 1994 film Mrs. Parker and The Vicious Circle. The Man Who Came to Dinner allowed audience members a glimpse into the larger than life and glamorous world of the New York Artistic Elite.

riginated “Sherry” on Broadway, however, Warner Brothers intended the film as a project for Lionel Barrymore. According to Kevin Hagopian from Penn State University, “there’s some evidence that Barrymore worked on the film, but by then, his alcoholism made it impossible for him to remember the many lines his part required.” And while many classic film fans bemoan the lack of Barrymore’s presence in The Man Who Came to Dinner,  I (for once) agree with  Bosley Crowther that Woolley was a perfect choice. Lionel Barrymore is a great actor, but I never found him lovable. Monty Woolley as “Sherry” is pure cinematic perfection.

The Warners were most wise when they finally decided to cast Monty Woolley in the title role which he so handsomely played on the stage. For Mr. Woolley makes “The Man Who Came to Dinner” a rare old goat. His zest for rascality is delightful, he spouts alliterations as though he were spitting out orange seeds, and his dynamic dudgeons in a wheelchair are even mightier than those of Lionel Barrymore. A more entertaining buttinsky could hardly be conceived, and a less entertaining one would be murdered on the spot. 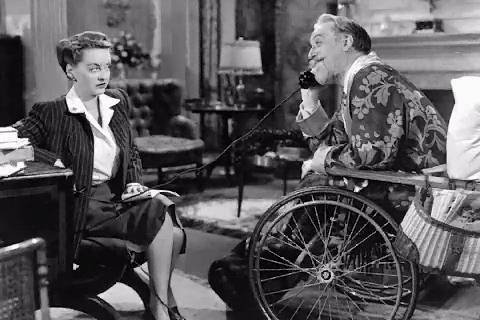 While Jean Arthur and Myrna Loy were considered to play Maggie, the role eventually went to Bette Davis, Davis “campaigned heavily” for the role (Hagopian, NP).

The remaining cast includes a very catty Ann Sheridan as Hollywood Star “Lorraine Sheldon”. Miss Sheldon is a thinly veiled Gertrude Lawrence. Jimmy Durante plays “Banjo”, Banjo is based on Harpo Marx, and Reginald Gardiner as “Beverly Carlton”, Beverly Carlton is based on playwright Noel Coward. Other notable performances include the on-screen debut of  one of my all-time favorite character actors Mary Wickes as the much abused “Nurse Preen” and the bright and charming Billie Burke as “Mrs. Stanley”.

The Man Who Came to Dinner is a well-crafted chaotic comedy, based on real celebrities in a fictional situation and reacting with their well-known personalities.

Sherry is a demanding and obnoxious guest from hell, whom the family “puts up with” because of his celebrity status and his threat of blackmail and lawsuits. While his famous temper, his weekly radio show, the parade of celebrity guests, and deliveries of live octopuses, impose upon the hospitality of the Stanley family, his faithful secretary Maggie falls for a local reporter, fearing he may lose Maggie, Sherry pulls out all the stops to keep his employee.

In The Man Who Came to Dinner, “Maggie Cutler” is the normal one in a world full of over-the-top personalities and she is unlike the typical Bette Davis role.  Her performance is understated, yet dynamic. It was in this performance where I first noticed Bette Davis’s true artistry as an actor. It is easy to play a big showy role and draw the audience’s eye, but to play the straight role in a rollicking comedy and still maintain the audience’s attention takes real star power, and Bette Davis has it in spades.

You can enjoy the trailer here:

Although a contemporary audience member may not recognize the celebrities this film lovingly jabs, the film is well-crafted and stands on its own as a classic comedy. And speaking of funny, I thought I would share a lovely reel of Bette Davis bloopers

Can’t get enough of Bette Davis? Join the party darling, visit Crystal at In the Good Old Days of Classic Hollywood on April 3-5th and check out the full Bette Davis Blogathon!