Dear Readers, this is my submission for the See You in the Fall Blogathon. Please visit our event host Steve at MovieMovieBlogBlog and check out other spectacular moments in physical comedy!

Some shows are so funny you laugh when you think about them. Laurel and Hardy in Liberty, My Cousin Vinny, Oscar, Murder by Death, to this list I would add the BBC television series Keeping Up Appearances.

HYACINTH. It’s of French origin. I believe my husband’s family in the distant past were “Huguenicks” or something. Not that there’s any French blood in him now, of course, you may rest assured, Vicar, you’re quite safe, there are no French habits here.

She lives for telephone calls from her sister Violet (Anna Dawson), “the one with a Mercedes, sauna, and room for a pony”, her son Sheridan, and her Royal Doulton tea set with hand-painted periwinkles, and not in that order. How would I describe her? An insane social climber who could give Martha Stewart a run for her money.

Hyacinth Bucket’s prim and proper attitudes make this show funny. She is an over-the-top the stereotypical house-proud proper English lady. The Queen’s portrait hangs in her sitting room, Winston Churchill hangs above the dining room, roses line a neatly manicured garden, porcelain knick-knacks, biscuit tins, and pearls in the kitchen.

HYACINTH. I wish you wouldn’t raise your arms like that, Richard, not when you’re overheated. It’s very common out of doors to perspire.
RICHARD. It’s warm work, Hyacinth.
HYACINTH. I wish you’d go into the back garden, so as not to disturb the people who respect us socially.
RICHARD. I didn’t invent the human cooling system.
HYACINTH. We mustn’t abuse it, must we, dear?

The coast is clear!

Joining Richard and Hyacinth are a strong ensemble cast. Her next door neighbors Elizabeth (Josephine Tewson) and Emmett (David Griffin) live in terror. Emmet stays indoors and develops “prison pallor” for fear of bumping into Hyacinth while Elizabeth fears invitations to coffee:

HYACINTH. What will you wear?

ELIZABETH. Well, I’m rather expecting you to tell me.

HYACINTH. I wouldn’t dream of interfering. But just remember, the important thing is not to clash with my summer floral. Since we live next door to each other,  the least we can do is coordinate.

ELIZABETH. Not my tan two-piece.

HYACINTH. I think something a little more chic, dear, don’t you?

ELIZABETH. Well, all right then, my green print dress.

HYACINTH. Isn’t that a little revealing?

ELIZABETH. My elbows, possibly, but that’s about all!

HYACINTH. Yes, I know, dear. But are we quite sure where the new vicar stands with regard to naked elbows?

ELIZABETH. I don’t think mine will drive him wild.

But Hyacinth has got a secret, and it is a doozy!

Despite her pretense, she is from a working-class family! Hyacinth’s Daddy (George Webb) is a senile WWI veteran who enjoys skateboarding and pursuing women while riding his bicycle naked.

Rose and the Vicar

She’s nervous, excitable, suicidal, or off to a convent.

Rose spends her days by the telephone waiting for a call from Mr. Butterfield, Mr. Hepplewhite, the trouble is all her Misters always have a Misses!

Then there is Daisy (Judy Cornwell), a ditzy slipper-clad, romance novel addict, with an aversion to housework.

Hyacinth can barely sit in her house.

But worst of all is Daisy’s husband Onslow (Geoffrey Hughes), a sleeveless, tattooed, beer-guzzling (but surprisingly smart) couch potato.

Her family proves Hyacinth’s less than illustrious upbringing, Hyacinth will go great lengths to hide her family from her friends.

Despite Hyacinth’s best efforts to “keep up appearances”, every episode ends in fiasco!

Or, covered in mud! 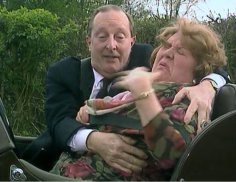 5. Golfing with the Major Hyacinth and Richard go golfing with Major Wilton Smythe (Peter Cellier) a respectable looking chap. But the Major’s got a bum leg, so Richard plays with the Major’s friend Porky Houten while Hyacinth and the Major go for a drive, the Major makes his intentions clear. To escape from this overly amorous octopus, Hyacinth jumps over a fence, runs through a sheep pasture, several miles back to the hotel. Her pride prevents her telling Richard, all she says is, “he did pay me a great compliment, apparently I remind him of the governor’s wife.” Other great moments: Hyacinth finds a seat in the lobby, Richard surprises the maid. 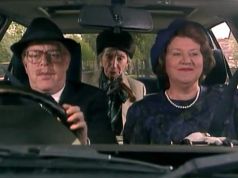 3. Driving Mrs. Fortescue What begins as a social triumph for Hyacinth, of course, ends in disaster. While driving the well-connected Mrs. Fortescue, Richard sees Daisy and Rose on the side of the road. As Rose shares her romantic woes with Mrs. Fortescue, much to Hyacinth’s chagrin, Rose decides they need a drink. Hyacinth would not be caught dead in a pub. Mrs. Fortescue, on the other hand, is all for it. While Richard and the ladies drink inside, Hyacinth loiters in the parking lot. To avoid being seen, Hyacinth steals a painter’s smock and hides in the back of a truck. Best moment: when the truck takes off!

2. Please Mind Your Head When Hyacinth and Richard rent a tiny weekend place in the country, they invite Elizabeth and Emmett for lunch. Hyacinth plays hostess in full riding gear. Emmett, knowing Hyacinth well, insists they go horseback riding. Hyacinth cannot ride, but her pride won’t allow her to reject the pastime of the aristocracy. Best moments: Hyacinth and Richard stuck in the kitchen, Hyacinth gets on the horse, Emmett gets his head caught in the ceiling. 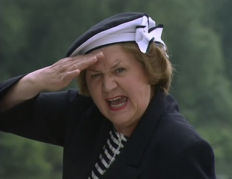 1. What to Wear When Yachting Hyacinth and Richard plan to spend the weekend at Sheridan’s friends’ father’s yacht. They invite Elizabeth and Emmett for cocktails and nautical buffet”. However when they arrive at the dock, they discover the boat is not a yacht, it’s a run down fishing boat. Hyacinth insists Richard moves the boat away from the other boats. Richard has no boating experience, but Hyacinth is confident, “British people have the sea in their blood.” Richard starts the boat but leaves Hyacinth ashore. 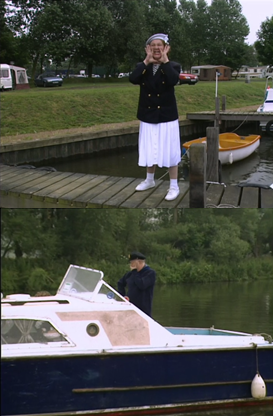 Hyacinth yells from the riverside but Richard cannot stop. Finally, he goes ashore and Hyacinth climbs aboard. 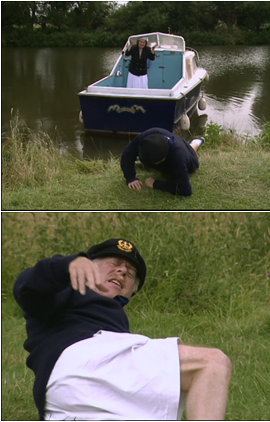 Hyacinth tosses Richard a rope so he can pull the boat ashore; after muddy slips and falls he finally swims to the boat but cannot climb aboard.

Hyacinth switches the boat into high gear dragging poor Richard, as he screams for help, all she worries about is him ruining his new jersey. Hyacinth helps Richard, but the boat drifts ashore and knocks her overboard.

In the next scene, Hyacinth and Richard arrive at the dock, just as Emmett and Elizabeth arrive for dinner.

You can watch Keeping Up Appearances on Netflix or check the listings of your local PBS Station! If you enjoy this series or seeking other female lead British comedies, I also recommend Are You Being Served?, The Vicar of Dibley, and To the Manor Born.

Please visit our event host Steve at MovieMovieBlogBlog and check out other spectacular moments in physical comedy!

Ciao for now, my dearies!